In the afternoon on 11 December 2009, many queued up in the Royal Academy courtyardfor the last chance to see Anish Kapoor’s exhibition. Kapoor’s 15 metre high, Rilke-inspired steel sculpture ‘Tall Tree and the Eye’  stood in the centre, glaring and defiant, reflecting images of the onlookers and the blue sky. 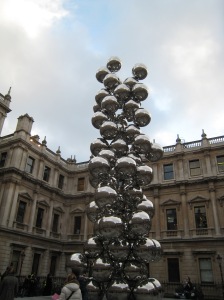 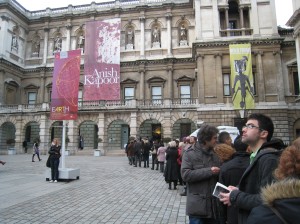 As ever, his exhibition has provoked much thought among both the art circle and the general public. I am particularly drawn to ‘Shooting in the Corner’, the tank sculpture that smears the exhibiting halls with projectiles of red wax. Viewers were shocked to see the venerable art gallery splattered with blood — the deliberate mess. The artpiece encourages us to consider for a moment of what lies outside the respectable, the art auctions, the Turner Prizes: the magnitude of sheer bloodshed and cruelty happening in the real world, , those gory war-truths we are exposed to on a daily basis. It helps us recover our perspectives and sensitivity towards the less fortunate.

Given free rein at the prestigious venue, Kapoor has stirred up wonder with his fierce imagination and the precision in craftsmanship: the polished, reflective stainless steel discs that make us look smaller than we are (how often do we succumb to the environment, climate change, pollution, social injustice, assuming that man can do little to alter his fate), while sometimes we turn to the other side of the mirror and gloat upon our exaggerated selves (in the capitalist, industrialised space that encourages self-importance and individualism).

The contorted worm-like shapes of the cement sculptures remind one of the bowels of a modern city, the struggles and desires of individual lives amid the jungle of towering skyscrapers, conformist cultures and technology. Kapoor has once mentioned that he is interested in the gutters, the inside-out, the self’s inner turmoils. (Ref: http://www.guardian.co.uk/artanddesign/2006/sep/23/art)

There are critics who hailed Kapoor’s work as universal and mindblowing, and those who saw it as nothing but shallow, eye-grabbing material. The jury is still out there and inevitably the controversy is also part of his legend.

One thought on “Anish Kapoor”