According to statistics by the Periodical Publishers Association for Magazine Week 2008, as many as 2,600 magazines are sold each minute in the UK. With a total of over 3,300 consumer magazines that fill the magazine racks across the nation, the gross revenue of magazines amounts to 2.6 billion pounds a year. 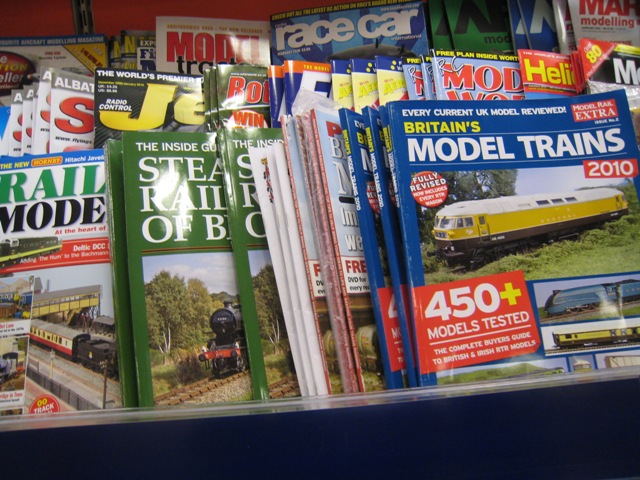 A quick stroll at WH Smith would show that the appetite for magazines in the UK is considerable, and the tastes rather diverse. Other than the all-time women’s glossy magazines, there are many perky titles targeting select age or social groups. For example, you can see a colourful collection of crossword puzzle books for the word gurus. To cater for housewives and the artistic minded, magazines on embroidery, sewing, knitting and crochet, jewelry making, origami, ceramics, doll-house making are available. Needless to say, mainstream choices like football, golf, health and well-being are much sought after, but one is most impressed to see a special category on railway magazines that appeal to passionate train fans (who probably have their train miniature collections at home). In the upper shelves you can find magazines recounting world war histories and Britain at war, with special commemorative issues and feature editions. What’s curious to me is that there is a huge range of men’s magazines in the country, from fitness, cars, boating and junks and yachts, to countryside & hiking, woodwork, marathon, and more. It also goes to show the diversity of hobbies in this country and their emphasis on maintaining work-life balance.

One interesting finding is that the average reader does not only read a magazine once. It is picked up some five times before it is forgotten or discarded.  Perhaps it is to look for the useful bits that one remembers, or magazine reading is a great way to kill time and pick up new information.

With the rising popularity of image communication, I think magazines can still go a very long way.

I am the author of three poetry collections including Letters Home (Nine Arches Press 2020), Goldfish (Chameleon Press 2013) and Summer Cicadas (Chameleon Press 2006), as well as a poetry pamphlet Diary of a Miu Miu Salesgirl (Bitter Melon Poetry 2019). I work as a copywriter and translator (Chinese-English). View more posts