The three-month exhibition at the National Gallery featuring Christian Købke’s paintings has done a great job in raising profile of this lesser-known Danish artist who died young, reviving attention towards Købke’s interpretation of characters and colours in his artwork.

Anchored in the simplicity of folk life and customs, and with an invested faith in realism, Købke’s work draws out the pristine quality of everyday life in his hometown Copenhagen, reflecting attributes of Denmark’s Golden Age.

Købke’s work reflect a people who share affinity and a nationalistic sense of ownership. One finds in his paintings a stronger emphasis on the discipline of lines, shades of light, and the use of wide perspectives. Water reflections are often repeated, an element that succeeds in enlivening the still landscape, such as the brightness and clarity of the lake in ‘Frederiksborg Castle in the Evening Light’. 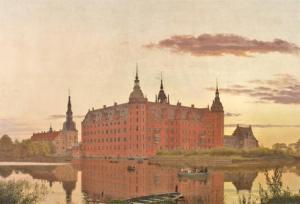 I am impressed by his fine attention to human figures in his work. The people in the celebrated masterpiece, ‘The View from Dosseringen’, illustrates his adeptness in representing the overlap between people’s personal and public lives, and his ability to juxtapose the boundaries of home and abroad. Two women are seen standing on the pier beside the national flag, waving at a departing boat, possibly saying goodbye to their family kin. By refraining from portraying emotions direct, the painter uses the canvas to conjure the fine balance between geographical distance and emotional closeness.

Købke, son of a baker in Copenhagan, produced considerable paintings despite being little known outside his home country and his poor health. His portraits are mostly that of close friends and fellow artists, instead of commissioned craft of distinguished personalities, yet these masterpieces uphold principles of harmony, integrity and structure.

Meticulous and introspective in his art, I particularly enjoy Købke’s portrait of friend and fellow painter Frederik Sødring, a painting so vested with hope, glowing with warmth and richness of colours, bringing home the romantic spirit of Denmark’s Golden Age.

The video by National Gallery sheds light on the artist’s creative philosophy.

I am the author of three poetry collections including Letters Home (Nine Arches Press 2020), Goldfish (Chameleon Press 2013) and Summer Cicadas (Chameleon Press 2006), as well as a poetry pamphlet Diary of a Miu Miu Salesgirl (Bitter Melon Poetry 2019). I work as a copywriter and translator (Chinese-English). View more posts